The Diamondbacks are bringing back the bullpen car.

Now, to see how many other teams join them.

On Tuesday, the D-backs announced plans to use a cart to transport both teams’ relievers to the mound, rejuvenating an idea that had lied dormant for two decades.

This is actually happening.

Why? Well, it provides some short-term amusement and an endorsement opportunity, and maybe it shaves a couple minutes off a game. Those weren’t said in the press release, though, which instead really leans into the nostalgia angle:

“We have been working on this idea for several years and there’s no more appropriate time to bring back the bullpen cart than this season, as we celebrate our 20th anniversary,” Diamondbacks President & CEO Derrick Hall said in a release. “Fans of baseball in the 1950s, 60s, 70s, 80s and even the 90s enjoyed watching their favorite players emerge from the bullpen in various vehicles and we’re excited for this special delivery to come to Chase Field.”

As usual, the nostalgia is sanitized. Looking into the White Sox’ own history, fans seemed to settle on enjoying bullpen cars by throwing things at them.

[dropcap]T[/dropcap]he details about bullpen cars are sketchy, but it appears as though the White Sox were toward the forefront of it. The Diamondbacks’ press release says the White Sox made the “first official entrance” via bullpen car in 1951, although the Indians utilized a “little red wagon.”

I don’t understand the distinction, and the most accessible modern accounting by ESPN’s Paul Lukas put the Indians first, which is backed up in the Chicago Tribune archives.

Here’s a Tribune article from July 7, 1950, describing a “little red auto” used for White Sox relievers in a game in Cleveland the year before.

[Ray] Scarborough having yielded to a pinch hitter in the seventh, the Indians’ little red bullpen auto delivered [Mickey] Haefner to the arean for a brief, and ineffective, relief stint. After alighting from his carriage, Mickey proceeded to walk [Luke] Easter, who was forced by [Larry] Doby. [Al] Rosen doubled to right, Doby stopping at third. Haefner walked [Ray]  Boone to load the bases, then walked [Bobby] Avila to force home Doby.

By this time, the red auto had made another lap of the arena, dumping out [Luis] Aloma. With Luis working, [Jim Hegan] popped to [Nellie] Fox and [Early] Wynn flied to [Dave] Philley.

Whatever the case, the White Sox introduced the bullpen car in 1951, and Marv Rotblatt was apparently the first to take a ride. A New York Times article from June 10, 1951, dismissed the scene at Comiskey Park:

The bullpen auto doesn’t transport visiting pitchers, only White Sox hurlers. When [Tommy] Byrne started walking in the fans booed lustily. Visiting pitchers walk at Cleveland, too, where a car is used for the home boys. A lot of folks had the impression this stunt was to speed up the game — but they’re all wrong.

[Lou] Kretlow rode back to the bullpen in the car after it had delivered Rotblatt and when the car passed the Yankee dugout all the Yanks came out, led by Stengel, and tipped their caps with mock politeness.

The Yankees extended the morbid motif at Comiskey Park a month later, according to the Tribune on July 18, 1951:

There isn’t much written about the White Sox and bullpen cars afterward. I did find one clip from the Binghamton Press and Sun-Bulletin on May 17, 1954, which said that fans forced the team to hide the bullpen car during a doubleheader: 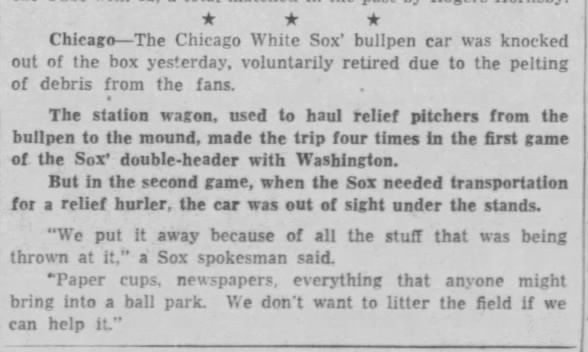 The Senators did make four trips from the bullpen over two innings in the first game, but no other game accounts mention such a scene.

Regardless of the validity of that specific story, the bullpen car was a debris magnet, both in the 1950s and decades later. After ending its run in 1955, the Sox brought the bullpen car back in 1981 as part of a partnership with Chrysler/Plymouth. It was a time when fans could get two free tickets by test-driving a Plymouth Reliant:

White Sox relievers had the option of getting a ride to the mount in a Chrysler LeBaron, which was being pitched by Ricardo Montalban at the time:

But if you want to picture it at Comiskey Park, you have to imagine more beer. Lukas cites a “ChiSox fan and historian Josh Cohen” with an account that isn’t exactly correct …

No one ever used it, because who wants to ride in a LeBaron? If the pitcher opted out of the ride, the LeBaron had to do a full lap along the warning track while the pitching change took place. The beer shower that the LeBaron received had to be seen to be believed — full $3.50 cups came raining out of the upper deck. After about a month of this, they decided to leave the LeBaron on the center-field warning track during the pitching change. The next year, it was gone forever.

… because the car lasted several years. It was around in 1983 when White Sox fans soaked it during a wild game with the Brewers on May 3. From the next day’s Tribune:

The White Sox were outhit against Tuesday night in Comiskey Park. No, not by the Milwaukee Brewers. Their own fans launched 1,000 or so direct hits on the bullpen car, which kept getting in the line of fire even more often than the pitchers. The beer-soaked vehicle was welcome comedy relief for this bizarre 3-hour, 43-minute struggle that began, believe it or not, as a pitchers’ duel.

It seemed to disappear by 1986 or thereabouts, and that’s probably where the idea belongs.

The White Sox probably could bring back the bullpen car because fans in general aren’t so inclined to destroy things in a day at the ballpark. Take mascots for example. At the time fans were trashing the LeBaron, they were also verbally abusing Ribbie and Roobarb. Three decades and change later, Southpaw is widely accepted as a presence at the park, so I bet a car(t) could make a trip back and forth with minimal attention.

I’d just predict the novelty wearing off pretty easily. I’d welcome a turn-back-the-clock promotion where a 1981 Chysler LeBaron ferries relievers who are 10 years younger, because it seems on par with having players sporting untucked, billowy jerseys in a game that counts. But I’m trying to picture a car(t) coming out of the center field fence at Guaranteed Rate Field and swinging by an outfield corner to pick up a reliever as standard procedure, and I’m imagining a clumsy sequence that loses its charm fairly quickly. There’s a reason why bullpen cars get resigned to the dustbin of baseball history, and not just because they’ve been covered in literal litter.

Take a second to support Sox Machine on Patreon

I completely understand the need to avoid the dour of Hansen being shut down for the remainder of Spring Training for the innocuous visit to Bullpen carts.

Maybe the Mets could find “Jon Voight’s LeBaron” from the Seinfeld episode and use that.

Get a sponsorship from Uber or Lyft for the bullpen car. National League teams making a double switch could plug Uber Pool.

Maybe they could have Mark Buehrle shuttle people back and forth in his personalized ATV or truck.

Or add an element of danger. Use Sale’s truck and force relievers to jump out of the bed.

Why not bring the opposing relievers out in a hearse?

i would never want to ride in one. it’s too awkward. i’d be like, “buddy, i can use my own two legs just fine to get from the bullpen to the mound. i don’t need you to drive me. but i also don’t want to reject your services because it’s generally accepted practice that i’m supposed to ride in the car. but then what happens when you drop me off? am i supposed to tip you? why should there be an expectation to tip you for a service that’s essentially been forced upon me that i don’t even want? are you actually any different than bathroom-towel-attendant guy or opens-the-taxi-door-for-you-at-hotels guy? just not cool, drives-pitchers-in-from-bullpen guy.”

I hope every Uber you take from here to eternity is the Diamondbacks bull-pen car, giant hat and all.

Robert gets the start.

Don’t you like what they’ve done to your car?

I was looking for this too.

“Corinth is FAMOUS for its leather!”

The use of the bullpen car is just so out of touch, particularly at a time when MLB is struggling to attracting a younger age demographic.

THAT said, it would have been entertaining to see Big Boy Bobby Jenks ride in it, or to see fans throw beer cups at the car if a Scott Linebrink was the passenger.

I’m not sure the “younger age demographic” would be repulsed or put off by it. It’s been so long since anyone’s used them that young fans won’t even remember them, let alone equate them with something old-fashioned. And I think kids (by which I mean here young kids, say 5 – 15) may well find the big-ball-and-cap buggy-style fun. Heck, my daughters enjoy the hat and ball game on the jumbotron.

Yeah, it seems like younger fans on Twitter (20- and 30somethings) are on board, at least based on the kitsch factor from old photos. The Mariners’ tugboat, for instance.

That said, the Sox could’ve had a Popemobile for Donn Pall, and everything kinda pales in comparison to that.

Bring it in! It was key in Jake Taylor finding love. Im all for it

I propose 50’s caddies to make the Cubans feel at home.

Off subject and maybe I’m the man, but this is an incredibly well written story about Ichiro.

Yeah, I recommend reading that one.

I do recall the bullpen car, it would be a nice car from Tony Piet’s dealership (or was it Ben’s Auto Sales?). I seem to recall it was just for the Sox pitchers though, and the visitor pitcher would have to walk; maybe I am misremembering.

I’m all for it if it means a kitschy baseball-capped golf cart. Not so much if it’s some Ford convertible PRESENTED BY YOUR LOCAL FORD STORES, like they do with that tired Opening Day drive-by.